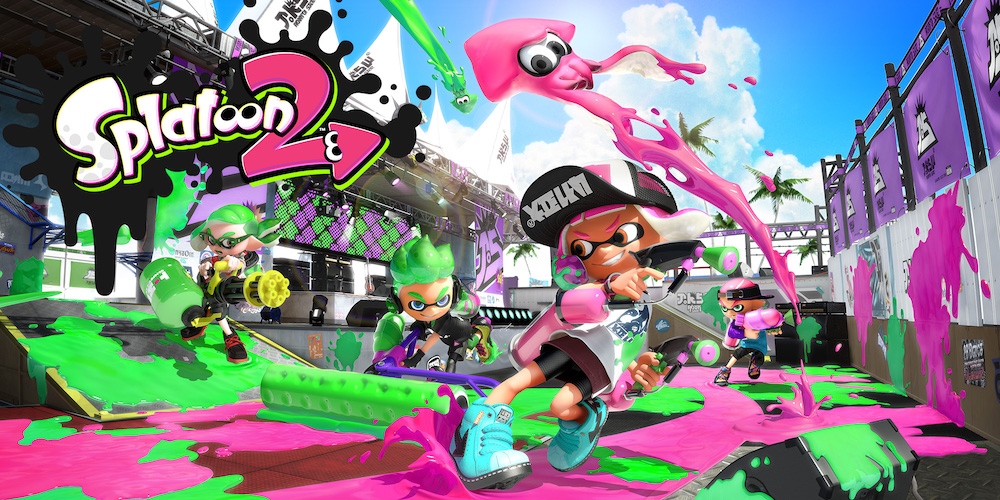 Splatoon will likely go down as the Wii U’s flagship title; a fresh and inspired take on a crowded genre during a time of lacking enthusiasm towards Nintendo. On the Switch, though, Splatoon 2 faces a much larger audience than the one that received its predecessor so warmly. This is Splatoon’s chance to prove it wasn’t just an oasis in a desert, but refreshing in any context. With new maps, modes and weapons, Splatoon 2 is certainly more than a rehash, but that’s not to say it takes as big of a leap as it could have.

What makes Splatoon 2 so special is its very core mechanics. Firing ink isn’t just an Inkling’s primary attack, but it affords them great mobility as they paint paths to swim through in squid form. Finding a balance between firing at enemies, evading in ink, and laying out more safe ground to manoeuvre through is incomparable to any other game I’ve played. The shifting focus between spatial control and direct combat can make for drawn out confrontations, tricky flanking, sneaky strategies, or just all out domination of an opponent. There is no doubt that Splatoon 2, like Splatoon before it, allows unique, clever and rewarding gameplay opportunities through its distinct set of mechanics.

What’s up for debate, though, is whether the systems and scenarios of Splatoon 2 fully facilitate the extent of its boisterous blasting. This is a multiplayer centric game, hanging its hat on its team-based online modes. There’s more here though, including a full single-player follow up to Splatoon’s campaign and a cooperative wave-based mode. Everything is accessed through Inkopolis; an enclosed environment to walk through and visit different vendors and lobbies. Player avatars fill Inkopolis, displaying the art they’ve drawn at the downtown mailbox. Despite being such a confined hub, Inkopolis feels so full of life and enthusiasm, as player-made drawings express a sense of fun more genuine than built-in characters possibly could. In the sake of ease-of-use, though, any location can be immediately travelled to via the menu or swapped to from another, alleviating any annoyance of heading back and forth to different stores.

Hero Mode is the single-player offering here, providing a Super Mario Galaxy-esque action platforming adventure with a little more splatting and a little less Luma feeding. Levels are linear challenges, pitting the player against the opposing Octarian force, environmental puzzles of traversal, and mixes of both. Levels feel thoughtfully designed with simple yet satisfying solutions and rewardingly hidden secrets, but the most interesting of Splatoon 2’s levels are tucked at the back end of the campaign, behind a few that are just decent. The plot of Hero Mode follows the first game’s, with Marie of the Squid Sisters directing missions. It’s shallow context more than it is a story, but the effort made to justify the adventure is worth appreciating, regardless of depth. If nothing else, it provides for some fun dialogue and weird boss designs.

Splatoon 2’s most substantial addition is Salmon Run; a wave-based co-op mode pitting a team of four against a horde of vicious Salmonids. Defeating enemies and carting their eggs back to a tank is a simple set-up to apply the fun of being an Inkling to a cooperative scenario, but Salmon Run goes surprisingly deep. As you climb the ranks, you start to see new enemy types and face new environmental dilemmas. The tide might raise or lower with waves, or a fog might obscure the enemy from sight. New and interesting challenges continue to arise as you climb the ladder, making each rank desirable to reach and valuable to keep.

The core of the game, though, are the team based competitive battles, the focus of which is Turf War. Rather than scoring kills and deaths, a round of Turf War is won by the team who covers more of the map in their team’s ink. Because each team shares a target, rather than filling that role for each other, the dynamic of Turf War is constantly shifting. Central areas become a tug-of-war of colour, flankers sneakily cover their enemy’s tracks, and the coverage of the home base becomes the most reliable source of points. The brilliance of each team’s ink being not only their means of attack and mobility but their goal for each round means that the tables of the battle turn with each encounter and vice-versa. If your team has the best coverage, you’re not just winning the game, but you’re better positioned to spread your ink further. Splatting an enemy isn’t without its point, though, with the victor’s teams colour splashing from their fallen enemy. Attacking the other team mightn’t be the objective, but it’s valuable to effectively spread your ink while you’re slowing down the opposition.

Play enough games to reach level 10 and Ranked Games are unlocked. This is where things get a bit more serious and focussed. Where Turf War games tend to spread each team across the map, Splat Zones, Tower Control and Rainmaker all centralise the attention of both teams. Whether you’re retaining control of a splat zone, pushing the tower to victory, or marching the Rainmaker through to the enemy’s side, there are no gaps between the confrontations here. Besting opponents in combat is your only hope when every player is directed to a specific target, giving quick movers and straight shooters the upper hand. Alongside Turf War, the competitive modes of Splatoon 2 successfully facilitate the broad zoning strategies as well as the precise combat techniques its gameplay encourages.

Weaving all of this together is character progression via gear and weapon upgrades. Clothing can boost your Inkling’s abilities in loads of different ways, while different weapons can dramatically alter your means of splatting. As well as rapid firing sprayers, Splatoon 2 offers rollers to coat the ground thoroughly, brushes to get around quickly and strike in close range, and chargers to snipe from afar; all the weapons you could want. For all the different approaches you can take in Splatoon, there’s a weapon best suited to your favourite, and a bunch that’ll make you try out different paths to victory entirely. Unlocking and trying out new weapons while keeping your outfit fresh is a nice motivator to keep splatting, all while providing plenty of options to mix up the gameplay.

The most contentious decision Splatoon 2 makes is to regiment its maps and modes into time windows. Only two multiplayer maps are in circulation at any time for each Regular Battle, Ranked Battle and League Battle matchmaking, swapping out every two hours. For Ranked Battles, the game type rotates too. The down side of this, of course, is that you can be playing the same two maps exclusively for two hours. The plus side is how quickly and simply matches are found and begin. With games moving as quickly as they do, it’s certainly massively important to get into the next one quickly, and it’s something Splatoon 2 does exceedingly well – even if it means loadout can’t be changed while in matchmaking. More frustrating is that Salmon Run, while always available to play locally, is only open for matchmaking every couple of days. Thankfully, with the options of Hero Mode, Salmon Run, Regular Battles, Ranked Battles and League Battles, there’s always more to do if you get tired of the maps in current circulation. The list of maps in total starts to feel a little short after spending a good amount of time with them, but given Splatoon’s track record and the state of Splatoon 2 already, there’ll be no shortage of free additions in the coming months.

Such a big part of Splatoon 2’s quality is its personality. From the sleek yet bubbly character designs to the quirky dialogue and flavour text. From the splashing of complementary colours against each other to the pops and squelches of the soundtrack. Everything is consistent and communicative of this slimy, fizzy world. Every mechanic is informed by the squid motif, while the Inkling culture and style then reflects those mechanics right back. The cohesive feel of all of Splatoon 2 marries even its smallest details with its distinct aesthetic lovingly.

Splatoon 2 is a wonderfully fresh feeling game. Though it isn’t a huge step from the first game, everything feels broader here while still being notably more refined. Topping off the core multiplayer modes with a fun campaign and great co-op mode means there’s a lot to do here. If competitive multiplayer’s what you’re here for, though, there’s still so much to experiment with, with a bunch of weapons dramatically impacting the way the game is played. Not to mention, all of this comes in a charming, silly package that commits to its look and ideas fully.

Staff Writer at GameCloud
Lliam has been playing video games since he was a kid and continues to like them a whole bunch. In the perpetual hunt for platinum trophies, he takes no rest, takes no prisoners, and also takes no performance enhancing drugs. He constantly finds himself thinking about and analysing the games he plays, and sometimes he even turns those thoughts into words.