During our last trip to Japan, my wife and I made sure to stop by an arcade to take in the local rhythm game culture, the both of us being enthusiasts of the genre. Amidst the lights, colours and washing-machines, we came across Taiko no Tatsujin. We’d heard of it before and had a blast getting to try it out in person (even if I did leave the experience with a terrible blister that tormented me the rest of the trip.) Hearing that Bandai Namco Studios would be bringing Taiko no Tatsujin: Drum ‘n’ Fun! to Australian shores for my beloved Switch, I was intrigued to see if the Joy-Con was capable of reproducing the fun and challenge of that treasured memory.

For those not familiar with the series, Taiko no Tatsujin games embody the idea of a simple control scheme pushed to the extremes. With two drumsticks you beat the Taiko drum in front of you, either in the centre or the side depending on the style of note; easy enough in theory, but it’s worth checking out a video of people in action on the Extreme difficulty to get the full scale of this. “Drum ‘n’ Fun,” being the Switch version, replaces the sticks and drum with the Joy-Cons, functioning with motion controls and the ever-delightful HD Rumble. 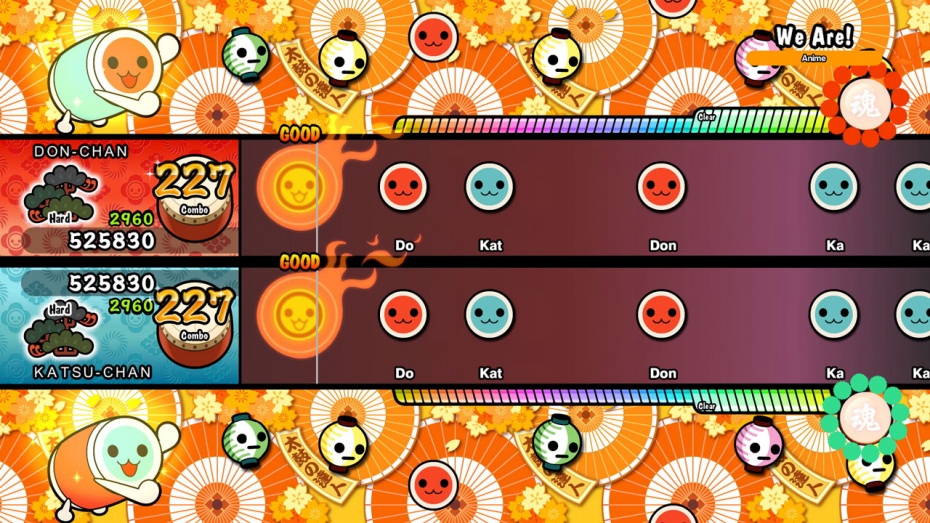 Upfront, the game is a delight for the eyes and ears. Vibrant screens and cute characters accompany the mostly catchy list of songs (including some favourites like “A Cruel Angel’s Thesis,”) creating an overall package that puts out a lot of energy. It’s definitely presented to appeal to a younger audience, but adults won’t suffer for this assuming you’re able to endure the frequent high-pitched remarks from the game’s many mascots, in menus and during songs.

Unfortunately, the core of this experience does collapse in on itself once you sit down with your Joy-Cons to play a few rounds. There’s a steep learning curve in the Easy/Normal rounds, not associated with the difficulty of gameplay, but instead with just learning how the motion controls will react to your movements. I found detection of centre hits versus side hits to be unreliable, and also frequently triggered on upswings. While I eventually got the hang of this and started pulling off smooth runs, the problem only amplified in the hectic Hard difficulty: despite persistence, I was not able to get the hang of the motion that the Joy-Cons wanted for the frantic beat.

There are some other control options offered, should you find yourself similarly fed-up with your desperate flailing. Button mode is a simple replacement but, in replacing the drumming motion with button presses, the feel of playing the drums is lost and thus the primary appeal of Taiko no Tatsujin. That said, it is a functional replacement in its high responsiveness. There’s also a Drum controller option that shows up in menus but, unfortunately, this controller will not be released in Australia. 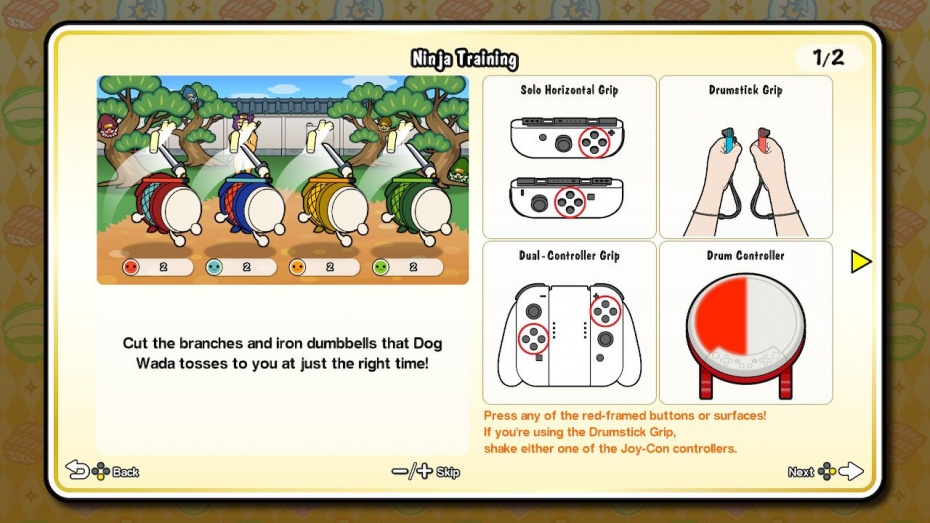 Thankfully, there is a fourth control scheme that reinvigorated my eagerness to play: touch controls. While exclusively single-player, the touch controls are not merely responsive, but also maintain the emulation of drumming. With a large drum taking up the lower half of the screen, which you either tap on or beside for the two types of notes, the feeling of drumming along with the tunes is strong. It’s addictive and satisfying, and I’d recommend that you try this control scheme out.

With that said, I still need to observe that the harder difficulties of Taiko no Tatsujin don’t translate as well to the world of finger-drumming. What would have been quite a challenge with Motion controls, even assuming accurate motion sensing, is quite straight-forward even on the highest difficulty. I never failed a song on my first run through and, while I’m a more experienced Rhythm gamer, most other games in the genre will frequently take me multiple attempts to even get a passing mark on the games highest difficulty. Naturally, your experience will vary here depending on your own familiarity with the genre, and your own sense of beat.

While the excellent touch controls only work on single-player, multiplayer manages to hold its own despite requiring the use of one of the less satisfying means of play. Even though the controls can be frustrating, playing with a friend or family member introduces the missing layer to the wacky controls: the hilarity of shared madness. On top of this, they’ve added a fantastic multiplayer element that’s all too often absent from rhythm games: simultaneous progression. While competing, your particular user on the Switch will be able to mark its progress and unlock new songs or mascots, allowing all participants to make personal advancements while enjoying a little competition. 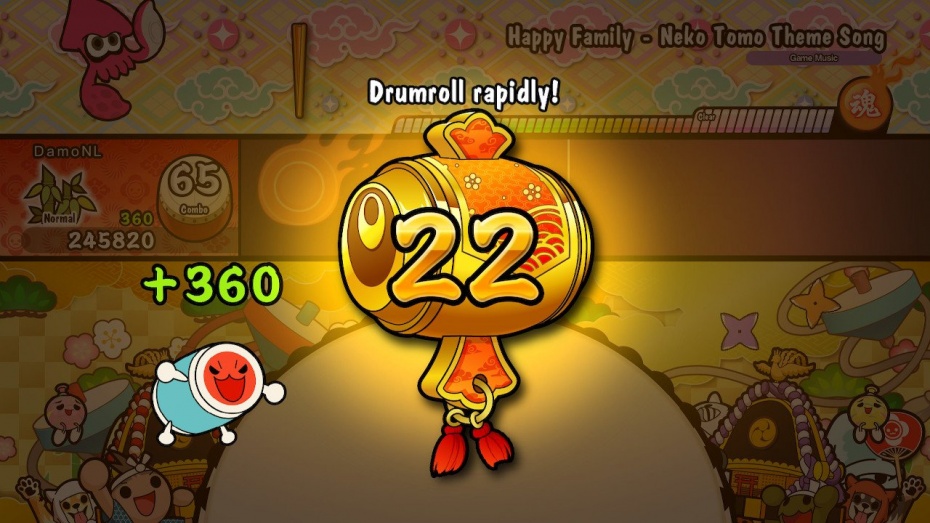 Outside the song-list, there’s also a large number of mini-games available, for up to four players. There’s a few in there that are pretty unique and challenging, but the overall collection is very much what you’d expect from the genre: cut the logs to the beat, catch the fish to the beat, and so on. The song pattern for the games is also consistent every time you play each game, so there’s very little replayability once you’ve mastered one. While it might get some laughs the first time you break it out, it won’t be a repeat performer at any parties.

Overall, the entire package isn’t the one I was hoping to find. When you consider the launch price for Taiko no Tatsujin, I’d be expecting a more developed experience – more modes, more songs or remarkably accurate motion controls. Given that this game is likely best experienced via touch controls, I’d be more inclined to recommend a game like Voez, also out for the Switch – strictly single-player and touch-based, but lots of amazing songs, doing more within the restrictions of touch actions, and at a fraction of the cost.

That said, the ultimate decision here comes down to your needs from a Rhythm game. I play Rhythm games for the challenge, for mastering the techniques before me to play on the highest tiers: for that purpose, Drum ‘n’ Fun could not be recommended. However, when considered as the party experience the very name of the game implies it should be, for gamers who see Rhythm games as a fun distraction, the appeal of sitting around with friends and pretending to beat on an imaginary drum can’t be denied.

While Taiko no Tatsujin: Drum ‘n’ Fun! failed to make the motion control experience capture the challenging appeal of the original arcade game, it’s not without merit. The colourful presentation and catchy set list are a joy to experience, and the tap controls are responsive if a little easy to master. It’s certainly nothing to shake a stick at, but fans of the genre may not find much for them here here, especially when the console already has some solid rhythm games available.

Staff Writer at GameCloud
Ben loves to overthink every thing he can, which is useful to most of his hobbies, including video games, particularly the puzzle genre, board games, and philosophical discussions with whoever will engage in them. It is much less useful in practically every other facet of his life.